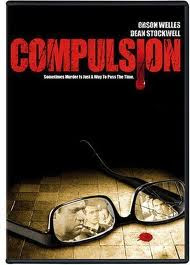 Compulsion is the fictionalized account of the crime of the century—the kidnapping and murder of a young boy by two bored and wealthy young geniuses—which led to the trial of the century in which one of the most famous attorneys ever argued for their lives. This is the film version of that book, which came out in 1959, the year after Nathan Leopold (aka Judd Steiner) was paroled and released from prison. 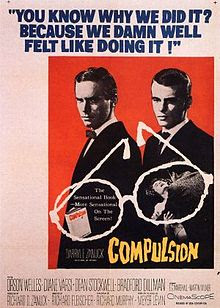 Having recently acquired an interest in Leopold and Loeb, and having read and reviewed the book Compulsion, it seemed only natural that I should watch and review the film with a critical eye toward seeing how well the book was translated onto the screen. I must say it was done very well. 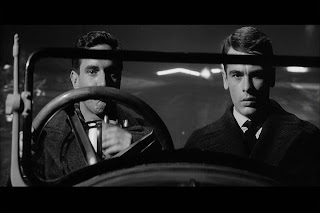 gallivanting about in Judd’s Stutz Bearcat and Artie tries to run down a drunken man who’s walking down the road. This sets the tone, not only for the film, but for their relationship. Judd grabs the wheel and averts the potential murder, so Artie tells him to drive (keep in mind, it is Judd’s car), and then orders him to run the bum down. Judd comes close, but at the last moment swerves, which angers Artie. To keep peace, Judd swears he’ll do anything Artie wants. Anything. And although we don’t know it yet, a murder is about to be born. 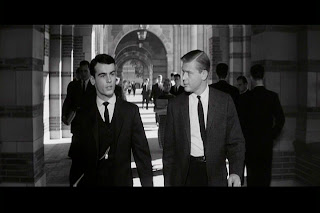 Martin Milner (later famed for his role in Adam 12, among other things) plays Sid Brooks (a fictional character, based on Meyer Levin), a fellow student at the university with Judd and Artie, and a fledgling reporter for the newspaper. Chance involves him in the case, and also his girl Ruth, who develops a relationship with Judd and later testifies at the trial.

This is a very faithful adaptation of the novel and captures the flavor of it very well. The cocksure attitude of the young geniuses who took the life of a young boy because they could, and to prove that such a thing could be done with great deliberation and no emotional involvement. We never see the victim, not even in the morgue, nor do we get a real sense of who he was. These things were not shown back then, too graphic. Today, I’m sure there would be a lot more gruesome scenes, but the film does not suffer for lack of them.

They came close to getting away with their crime, but a pair of eyeglasses was the crack in the facade that became the first clue, and that ultimately led to them. E.G. Marshall plays the prosecutor, Horn, who is determined to see these two boys hang for what they’ve done, despite their tender ages—18 and 19—and despite the fact that never has the state put to death anyone below the age of 21. 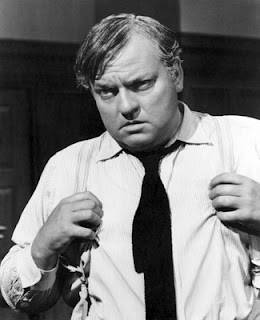 Darrow, in real life)—flawlessly played by Orson Welles. In a brilliant ploy, Wilk withdraws their plea of not guilty and changes it to guilty, with mitigating circumstances, thus eliminating the trial by jury. And despite the best efforts of the prosecutor, he does not plead insanity, as that would bring the jury back in. And as he explains to the boys’ parents, he’d rather plead for their lives before one man, the judge, than twelve, in the form of the jury.

Welles’ performance is riveting. Despite being very familiar with him as an actor, his persona disappears and he becomes Wilk/Darrow, and his very eloquent summation speech is some of his finest work. That is the hallmark of a great actor, when you stop seeing the man, and only see the character.

Although physically I thought the main characters were mis-cast, as Dean Stockwell resembled Artie more, and Bradford Dillman Judd, in terms of performance, they got the nuances of the characters down pat. Artie, the effervescent know-it-all who dominates Judd, and has to be in on everything, including “helping” the police with the case. The quieter, more introspective Judd, who allows Artie to control him. 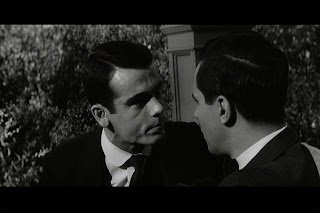 What you won’t see in the movie that isin the book, and what is barely hinted at in the film (and you really need to be looking for it to catch it) is the true nature of the relationship between Judd and Artie, namely that they were lovers. Any mention of what the book presents has been excised, probably due to the sensibilities of the times. I don’t think it would have played well, and probably would have muddied the waters. Today? Another story altogether.

One comment on the opening music—although probably good for its time, now it sounded to me very 50ish and jarring, but perhaps that was the effect the composer was going for. It’s jazzy and discordant, so maybe that’s the right feel for two young men out of step with society.

Also on the DVD were the theatrical trailer and a teaser and two trailers from other Fox films—St. Valentine’s Day Massacre (Jason Robards Jr) and Murder Inc. (Stuart Whitman and Peter Falk).

One last comment on the film. As I said before, Judd was just beginning a relationship with Ruth Evans, who was Sid Brooks’ girl, and I think that goes a long way to show his innate humanity, as opposed to Artie and his black book, his love ’em and leave ’em philosophy. There is a very intense scene between Judd and Ruth in the film.

On the whole, I was very pleased with the film, and highly recommend it. 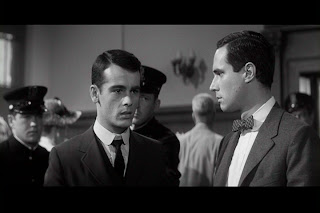 Young Man Sitting by the Seashore